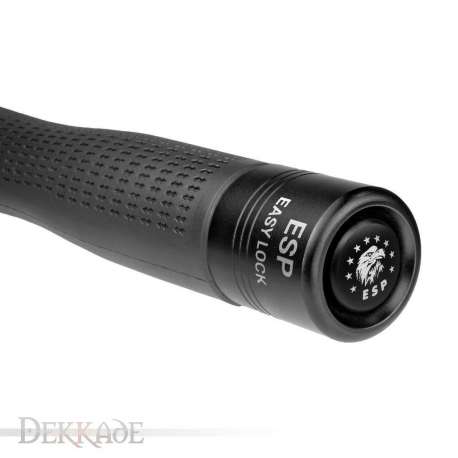 Notify me when available
Rating
5

Expandable Baton in hardened steel intended for professional use by Police and Private or Public Security Forces.

The difference to the non-hardened version is the expandable tubes, which are made from a more superior material, which is hardened by heat treatment. Its tubes are made of high quality hardened steel, tested by time and by millions of already produced batons. The hardening makes the telescopic tubes extremely resistant against bending even during strong strikes.

We propose to you this version with type of high quality anti-slip handle with indented – rough surface of the type "H" (this design expressively decreases any possibility of the baton being yanked from the hand and gives the user a comfortable certitude). In addition, the rubber is certified for contact with the skin without health risks, even in the long term.

This Baton meets all the requirements of the German standards for Expandable Baton, and during fall tests the baton was dropped from 2-meter height on concrete (the German standard requires only wood, which is a much softer surface) and it was then possible to close it as smoothly as before.

We have opened and closed the baton 6 000 times and it still works properly. The locking mechanism was tested repeatedly by dropping the baton into mud.

This Expandable Baton Model ExBT-20HE has a round ending, which allows to have the "Easy-Lock" button in a compact and more discreet version.

This type of baton can be opened in two ways, depending on the situation or the user's choice:

The best feature of this baton is the closing method. The lock is released when you press the button at the end of the handle and push the baton tip inward. The tubes can be then easily pushed back inside the handle. The baton can always be closed easily and effortlessly, no matter the force with which you swung the baton open. There's also no need to look for any hard surface you would need to close a friction lock expandable baton.

WARNING! The baton can be closed only with the button located at the end of the handle. It is not possible to close it by pounding it on the ground – that might only damage it.

Rubber specially designed for a fast hold. Outside diameter of the grip: 26,5mm. The rubber is certified for contact with the skin without health risks.

Due to the button located in the baton ending, it is not possible to add any accessories to the baton handle. Only accessories that attach to the tubes are compatible, such as Detection Mirrors BM-02 and BM-03 and the Metallic Clip.

good deal on a quality baton

I walk each day and carry the baton. The weight of this baton makes it very easy to carry. Expanding it to its full length is very easy. I am most happy with the purchase and I would recommend the product.

30 other products in the same category: