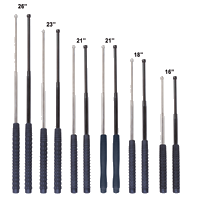 We propose you some expandable batons ESP of high quality. The expandable batons are produced either in the common version non-tempered steel, proposed in two lengthes and one handle model, or in one hardened steel version (Police), proposed with five different lengthes and five handle models. The expandable baton unfolds of a fast gesture of the forearm or wrist and stay blocked in opened position. The expandable baton is planned to be used in case of self-defense in the situations at risk. This product is suited for the police (tempered version), the companies of security, the agents of security, for warn some typical of attack in white weapon in particular. These Products are freely sold to the major persons. Considered as weapons of D category, they are not subjected to statement and their regime is free. Their transport is forbidden without justifiable motive.

Expandable Baton  There are 87 products.